Queensland became a separate British colony from NSW in 1859, cash poor but rich in land. The first parliaments knew a prosperous pastoral industry would generate income for Queensland through wool and beef exports so the politicians listened to the wants and needs of their constituents on the land.

One pressing complaint of the rural sector, both agricultural and grazing concerned kangaroos, wallabies and other marsupials. They ate food intended for both humans and stock and drank sparse water in drought-prone areas.

The situation couldn’t go on. Action was needed, action that took the form of a new law:

Image 1. The header of Queensland’s new law authorising a cull of kangaroos, wallabies and other marsupials. Image from the Queensland Government Gazette 1877 Volume XXI.

‘Destruction of Marsupials’ quite simply meant money for scalps. In the 1877 Act a scalp is defined as “a portion of the skin of the head of any marsupial to which both of its ears are attached”.

The Queensland Governor, Sir Arthur Edward Kennedy introduced the Marsupial Destruction Act to the seventh parliament of Queensland. In his speech he said:

I have heard with regret of the ravages made by Marsupial animals in some of the pastoral districts. I trust that the Act which deals with this matter will be found to have a beneficial effect. (Queensland Government Gazette, 1877 volume 21 page 1021.)

George Saunders’ Springfield (now Saunders Beach) was in the Kennedy Pastoral District. Just how bad were kangaroos, wallabies and other marsupials in the Kennedy? At Springfield in particular? Newspapers and books of the time may tell us. A source giving a more human aspect are the letters of another pioneer selector of that era, Robert Logan Jack and his family.

Jack took up land in the early 1880s south-east of Townsville, in the vicinity of Mt Elliot (nowadays in the area around the Palm Creek Folk Festival), also in the Kennedy District. The Saunders’ Springfield lay about the same distance from Townsville but to the north.

Jack named his selection Strathendrick. The letters from “Strathendrick Townsville” appear in Jack’s biography Putting Queensland on the Map: The Life of Robert Logan Jack, Geologist and Explorer (Additional Material). The book was written by his great-granddaughter, Felicity Jack.

The letters to relatives in Scotland are peppered with tales of kangaroos and wallabies, so frequent as to be commonplace. Such events as:

It seems reasonable to assume, because of the short geographical distance between the two properties and overall similarity in climate, that the Saunders’ experience  with kangaroos and wallabies was comparable.

The Crown Land Files from the Queensland State Archives that relate to Springfield state an inspection was carried out on the property on 5 August 1890. The inspection revealed four acres (about 1.6 hectares) was given over to “gardens and orchard”. George Saunders’ wife, Elizabeth was an Irish farmer’s daughter before she immigrated to North Queensland and would have been raised to value home grown vegetables.

It is known that the Saunders entertained with at least one house party. How frequently guests brought kangaroos is not known. 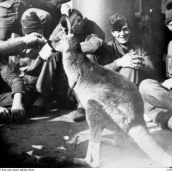 Image 2. AT SEA. A KANGAROO BEING GIVEN A DRINK ON BOARD A SHIP CARRYING AUSTRALIAN TROOPS BOUND FOR THE SOUTH AFRICAN WAR 1899-1902

Image 3. Maadi, Egypt, c1915. Three kangaroos, the mascots of the 3rd Australian Light Horse Regiment. The kangaroos were a subject of curiosity amongst the local Egyptians.

HOW THE ACT WORKED

The Marsupial Destruction Act went through many revisions and renewals and officially ceased operating in 1930.

For the Act to work successfully the money men received for scalps had to be worthwhile. In 1877 the Queensland Government devised a scheme in which it matched funds collected from landholders. The weighty bureaucratic structure relied on a landholder’s honesty in the first instance, in that they had to lodge a return of the number of sheep, cattle and horses by a fixed time.

An involved system of fines could be imposed along the way. Eventually the Queensland Government ceased to match the amount of the levy raised from landholders, its contribution decreasing with each successive Act.

Some features of Thuringowa Marsupial Board:

A general assumption can be made from this and the fact only eleven Marsupial Board were elected in Thuringowa out of a possible fifty-three: Thuringowa landholders as represented by the Thuringowa Marsupial Board had no interest and/or confidence in Marsupial Boards ridding their lands of marsupial “pests”. Why? There could be several reasons for this:

1889 – A YEAR IN THE WORKINGS OF THE THURINGOWA MARSUPIAL BOARD

The Act goes on to say that an owner of not less than 500 head of cattle or 2,500 sheep was eligible to sit on a Marsupial Board.

One shilling was the lowest amount that could be levied by a Marsupial Board.

The Act in force in 1889 set the rate of bonuses (bounties) per marsupial scalp for scalpers. For handing in a scalp of a: kangaroo or wallaroo – 8 pence; and wallaby or paddamelon – 4 pence.

In the same year the Thuringowa Marsupial Board applied to the Queensland Government to include the scalp of dingoes on the list of scalps they would accept. Permission was granted at more than five shillings per scalp.

Image 6. Another aid for Queensland landholders in the battle against the kangaroo ‘pest’. Pugh’s Almanac 1889.

Over the period from 1877 to 1930 27 million kangaroos, wallaroos, wallabies, paddamelons, bandicoots, foxes and dingoes were destroyed under various Marsupial Destruction Acts. Marsupial Boards authorised payment of over £1,187,000 (one pound £ equals $2) in bonuses  to scalpers. Of that £349,000 came from the Queensland Government. [Hrdina 1997 Abstract]

Was the scheme a success? Again to quote Hrdina, page 285:

…the result of the programme was, in fact, no decrease and perhaps even an increase in the numbers of these species of large macropods [kangaroo and wallaroo] and possibly also the dingo.

He goes on to say:

The data suggest that there were significant declines among the smaller…and less numerous smaller macropods [e.g. wallaby, pademelon] and bandicoots.

All macropod species have been protected nationwide since 1952 and regulated from 1954. With kangaroos becoming valuable for their skins and meat, codes of conduct for commercial and non-commercial killings were introduced in 2008. Over two million large marsupials are harvested in four states per year, the largest in Queensland’s rangelands. The harvest is sustainable, with Queensland hunters having to comply with the national code. 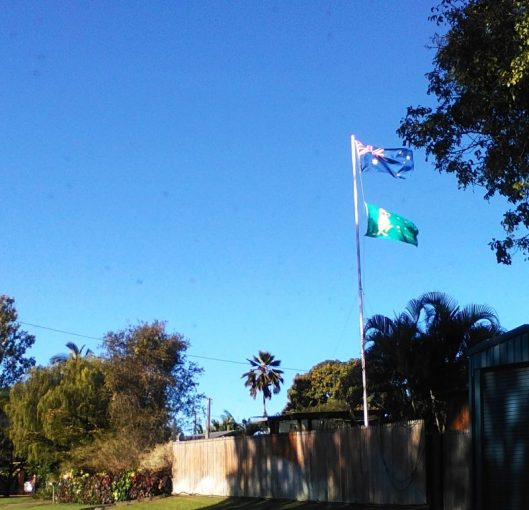 Image 7. On a flagpole in Atoll Street the Australian Flag is proudly flown. Below it is the boxing kangaroo flag, popular with Aussies at international sporting events.

Image 8. Kangaroo warning sign for motorists, Balgal Beach. This beach is another of Townsville’s northern beaches.

Do you have any tales of kangaroos and wallabies at Saunders Beach? If you have Saunders Beach History Project would love to hear from you via a comment below or email saundersbeachhistoryproject @ gmail.com (To protect our address spaces are inserted either side of the @; please remove when you email us. Thank you.)

Australian Government Department of the Environment 2008 National codes of practice (commercial and non-commercial) for the humane shooting of kangaroos and wallabies. Viewed 22 July 2016. https://www.environment.gov.au/biodiversity/wildlife-trade/publications/national-codes-practice-humane-shooting-kangaroos-and-wallabies

The State of Queensland (Department of Environment and Heritage Protection) 2016, Overview of the Queensland macropod industry. Viewed 28 Jul 2019.

A shortened version of this article appeared in the April/May 2016 Beach Banter. The Beach Banter is the newsletter of the Saunders Beach Community Centre Inc.