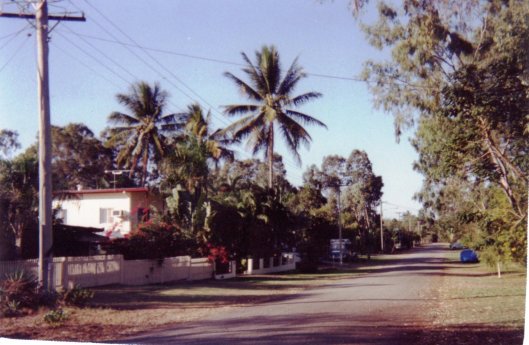 Saunders Beach History Project is pleased to share with you an oral history from a long time resident (“L.”), looking back at memories from Saunders Beach in days gone by. Included below is a recording and the transcript.

Way back in the dim dark ages (that is, 1971) an auction took place at the Land’s Office for 6 Lots at Jalloonda (now known as Saunders Beach). One lot in Atoll Street was successfully purchased by a man who many years later I met and married.

In the contract, improvements to the property had to be made within 7 years or the land would be forfeited. In 1978, just before the deadline a concrete foundation slab was laid, thus avoiding problems.

We were living interstate and had 2 children and decided in late 1983 to build our house and settle into life at The Beach. The house was completed a year later. Who would have thought we’d still be here in 2015!

The Beach was a great place for young families. A small village and not likely to become anything else. It would lose the community personality.

Few changes have happened over the years we’ve lived here: the Community Centre, 2 houses trucked in and installed on their waiting properties, and a dining precinct.

On the beach itself there was a rock outcrop, just off the Reef Street camping area. It was very prominent for many years and the kids would climb all over it and pretend they were mountain climbers. Now the sand has all but covered it over.

Families have come and gone and we have seen Townsville population come creeping quite rapidly towards us. But we still hold to the small village atmosphere. Kids have access to more than 2 schools. Shopping is at least 15 minutes closer and more medical facilities are readily accessible.

1990/1 was a period of good rainfall during the wet season. A particular bad weather event had us all fed up and wanting the sun to shine. One family on Cay Street one morning heard a very unusual thud at their back door. The back door was facing the road not the seaside. The young mother about to open the door to see what was making the noise, saw a crocodile hitting the wire door screen. The swamp opposite was full to capacity with floodwater and we suppose the croc wanted to dry off. A bit of a shock to say the least. 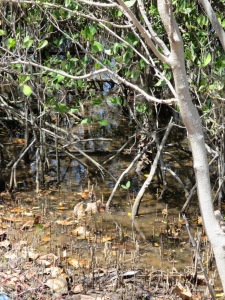 In 2004 again we had bad weather approaching and a small single engine plane landed on the sand, much to the surprise of residents on the beach front. The pilot thought it safer to land than risk the inclement nature of the storm. There is an article about this on the Community Centre’s noticeboard.

Even though the distance we had to travel to shop, work and/or school was at times a pain, I found I could gather my thoughts and plan the work for the day and the drive home, once we had reached Saunders Beach turnoff, the winding down was great. PEACE.

Working in town didn’t allow us to get to know many of the village people, but if they had a dog, and they were walked on the beach, we would acknowledge everyone and especially Jasper, Ozzie, Alf, Woofer, Diesel, and so on.

What couldn’t you love about our beach – kilometers of beautiful sand. Even after a storm when other areas’ debris has been washed up.

We say nothing much happens here. But the village still casts a magic spell for old and young. Maybe not very exciting for the teenagers and young adults who desire a bit of nightlife activity.  To me The Beach is like a cocoon keeping us safe.

What about you? Do you have memories flooding back of the old days at Saunders Beach? If you’ve got a story to share, contact us on saundersbeachhistoryproject@yahoo.com or leave a comment below.