In May 2005 Black Swans paddled serenely in the waters off Saunders Beach. 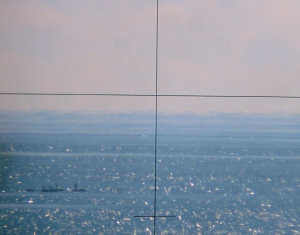 Photo taken with the aid of a builder’s dumpy level.

Saunders Beach with its mangroves, sandy dunes and tidal variations possesses an ideal habitat for seabirds and migratory waders. At different times of the year a beach walker sees Eastern Curlews, red-billed Pied Oystercatchers and stately Pacific Reef Egrets, amongst others.  Overhead Brahminy Kites soar and wheel and Australian Pelicans swoop down to settle on the water.

Black Swans – Cygnus atratus – are found throughout Australia but are more common in the south of the continent. They feed on aquatic plants both in the sea and in wetland areas where they can reach the bottom with their long necks. They prefer waterways with abundant vegetation and are nomadic birds with no set migratory pattern. Generally Black Swans mate for life and their breeding season in these parts is from February to May. They may travel great distances (usually at night) depending on patterns of rainfall or drought. For example in periods of high rainfall they often move inland.

During the day they tend to be at rest, as in the Saunders Beach photograph above. These Black Swans probably flew or paddled from Townsville’s Town Common, about ten kilometres by sea from Saunders Beach.

Nowadays the Town Common is a 3,245 hectares conservation park, comprising several bird hides, walking and mountain bike tracks and forest and wetland walks. The Town Common had its beginnings in 1868 when thirty-seven freehold land owners of the Townsville Municipality petitioned the Queensland Colonial Government for an ‘urgently’ needed ‘township common’. The following year it was proclaimed.

From the early days of the Town Common the Queensland Government’s Wildlife Online has fourteen records for Black Swans. The Black Swan’s Queensland conservation status rating is C, least concern, the under the Nature Conservation Act 1992. The other ratings are:  Extinct in the Wild (PE), Endangered (E), Vulnerable (V), Near Threatened (NT), or Not Protected ( ).

Have you spotted Black Swans on the sea or in flight? Please let us know with a comment.

Sometimes Black Swans have fun as this link shows: